In the south-eastern region in Rajasthan, Chittorgarh is an important historic place to explore. It houses many ancient structures, palaces, and forts that boast the heritage and historic charm of this place. Formerly it was the capital of the Kingdom known for the famous battle of Ala-ud-din Khilji. It resonates with several stories of Rajputana pride, bravery, and chivalry. With all the significant things to do and the best places to see in Chittorgarh, it will take you a week to explore all around the city. Every year several tourists visit the place to discover its rich culture and history. Even the foreigners from across the globe visit here to witness the glory of the Chittorgarh Kingdom. Discover the best of this city while covering the 15 Best Places to See in Chittorgarh in 2021. 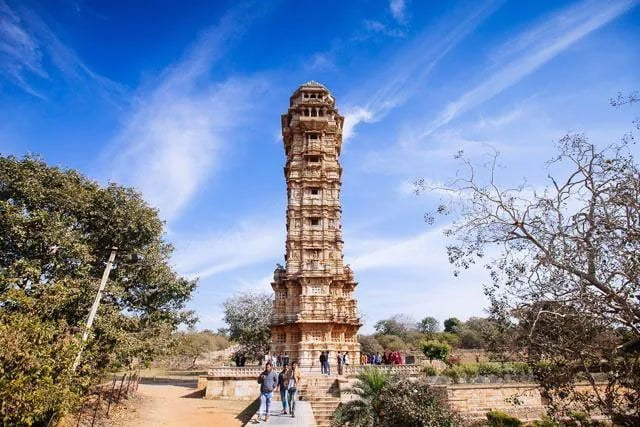 Well known as a Water Fort comprising of 22 water bodies, palaces, temples, and towers, spread over 700 acres of land. The town is mainly recognized by this historical jewel that reveals the fascinating history and the Jauhar by the queens during the time of war.

The ancient palace within the fort, Rana Kumbha Palace claims that it is one of the most haunted places in Rajasthan. The series of canopied balconies, stables of horses, and elephants of the palace are a must-see thing on your Chittorgarh tour. The tales say that after the valiant defeat of Rana Kumbha, his queen, Rani Padmini committed Jauhar and their spirits still haunt the palace.

In the midst of Chittorgarh Fort, Rani Padmini Palace is named after Queen Padmini. She was also known for her impeccable beauty and intelligence. History of this palace says that she herself inspected the defenses of the palace when the fort was under the siege of the Sultan of Delhi.

An epitome of the modern style of architecture, Fateh Prakash Palace was named after Maharana Fateh Singh. It is a home of an idol of Lord Ganesha who beautifully lies inside the palace. There’s an array of impressive wall paintings and murals because of which is a popular museum today.

Dedicated to Goddesses Kalika, Kali Mata Temple is the Kuldevi of Mori Panwar Clan of Kshatriya Rajputs. One of the most religious places in Rajasthan, this temple was initially a temple of Sun God and was built by Bappa Rawal.

Sightseeing in Chittorgarh remains incomplete without visiting the lush green beds of Bassi Wildlife Sanctuary. You can easily spot a Langur, Mangoose, and even a Panther while roaming around the reserve. It is spread in the area of 15000 hectares and is a paradise for nature lovers.

In the heart of Chittorgarh Fort, Padmavati Palace stands testimony to the legends and stories of the bygone era. The palace recalls Rani Padmini also hailed as Queen Padmavati. The braveheart queen of Chittor well-known for her flawless beauty.

A victory tower in Chittorgarh is an imposing monument that was built by Mewar King, Rana Kumbha. One of the most attractive tourist places, Vijay Stambh of the tomb looks more appealing with all the intricate carvings and designs.

Amongst the 27 Hindu Temples in Rajasthan dedicated to Jain Tithrankaras, Sathis Deori Temple is an important place of worship for the Jain Community. Its tranquil complex will take away all your woes and will leave you at peace while the beautiful 11th-century architecture will blow your mind away.

Shyama Temple beholds one of the incarnations of Lord Vishnu – Varaha. It is located within the grand fortress and is one of the unmissed attractions in the city. The architecture of the temple includes a lofty roof and pyramidal tower.

The most important water tank of Chittorgarh Fort, Gaumukh Reservoir is also one of the most recommended by Chittorgarh. The green water of a famous place to visit in this place and is a sacred spot among Hindus.

Sanwariyaji is the temple of Lord Krishna in Chittor where hundreds of visitors come to pray. It is around 40 kms away from the main city and is one of the worthy tourist sites to visit here. It is believed that worshipping the temple will shower blessings of wealth and prosperity.

Around 110 kms away from Chittorgarh, Maha Sati is known to be one of the most sacred places where the rulers of Udaipur were cremated. It boasts a beautiful structure and water reservoir where one can see the glistening sun.

One of the famous monuments is Ratan Singh Palace which is known for its historical importance. The palace holds a historical charm and also encloses a Ratneshawar Lake which enhances the beauty of this castle.

The months of September to March are best to explore the beauty and history of this place. Especially in the month of January, the entire Rajasthan becomes more charming and appealing. Thus, it is great to plan a Rajasthan Tour along with a visit to Chittorgarh during these months.

How to reach Chittor?

By Air – The closest airport to Chittorgarh is in Jaipur at a distance of 137 kms. So, you can reach there and then hire a Jaipur to Chittorgarh Taxi.
By Train – Chittorgarh Railway Station connects well with other beautiful cities of Rajasthan. You can board a train from any of the prominent places in Rajasthan and reach the city.
By road – Chittorgarh can be accessible with other places by road (NH 76 and 79). You can hire car rental services in Rajasthan and travel hassle-free to the cities.
Hopefully, you can’t resist experiencing the grandness of these afore-listed 15 Best places to visit in Chittorgarh. If you are planning your weekend trip from Udaipur to Chittorgarh, then you must explore these places and witness the unending charm of it. For sure the tour will bring lifetime memories to you!